Where Does Extraordinary Live? 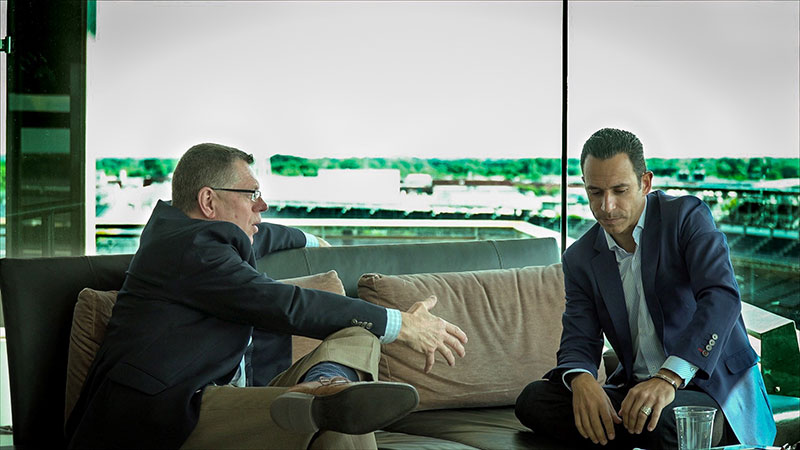 “When the student is ready, the teacher will appear” – Buddha Siddhartha Gautama Shakyamuni and the Theosophists

In the Panasonic Pagoda building, eight stories above “The Yard of Bricks” at the famed 2.5-mile oval known as The Indianapolis Motor Speedway at 16th and Georgetown, sits the 3-Time Champion of The Indianapolis 500, Helio Castroneves. Just 19 days prior, .2011 seconds separated Helio from the rare air club of 4 wins and joining racing legends, A.J Foyt, Al Unser and Rick Mears.

I asked Helio my typical coaching question, “Do you consider yourself the type of person that Loves to Win or Hates to Lose?”

“Are YOU kidding me!”, retorts Adriana Henao, the gorgeous and equally exuberant wife to Helio. Minutes before Helio’s answer, Adriana sat thirty feet away and quietly focused on her business, responding to numerous emails. She stands and continues, “You HATE to Lose! You are still talking about that race and the last 4 laps.”

Takuma Sato had been relentless in his effort and on lap 196 he made a bold move and that allowed him to pass the three-time winner to take the lead. Castroneves made several efforts to get back to the top spot, but Sato’s car was too fast, and he would not give up his position.

Helio proceeded to lament the genuine and heartfelt friendship he shares with now fellow 500 Champion Takuma Sato. I am listening to the words as Helio continues in his usual gregarious and charismatic manner but, I become fixated on witnessing this rare moment of human behavior.

I have been coaching peak performers for almost 20 years. In that time, I have asked the same question of literally hundreds, if not almost a thousand various CEO’s, Boardroom executives, executive managers, middle managers, sales executives, and receptionists.

Usually, I get the same formatted response, “Oh, I HATE to Lose!” or “Well, I love to win.” The conversation proceeds by my client defending, justifying or explaining their response. They continue to INTERNALIZE their emotional response as if to convince themselves why their belief is the cornerstone of who they are.

Jim Collins in his 2001 classic “Good to Great” book chronicles why some companies make The Leap and others don’t. How pursuing Greatness as a culture will insure sustainability. I suddenly realized in the common moment of a response to an uncommon question, I just witnessed the next evolution in mindset and culture. It was no longer good enough to be GREAT, one must become EXTRAORDINARY to compete today. Technology, information, equipment and SPEED has narrowed the gap so tightly that even .2011 seconds seems` an eternity to the “common” competitive person or sustaining company.

Most people see Helio’s signature victory celebration of climbing the fence after taking the checkered flag or his radiant performances that earned him the coveted crystal ball trophy on Dancing with the Stars. Helio’s infectious enthusiasm has garnered the admiration of millions of fans-both on and off the track. Very few know or remember that a childhood hero almost professionally and financially ruined Helio; or that his father had to declare bankruptcy while helping Helio on the journey to realize his son’s dream; or, the fatal accident of Greg Moore that ultimately gave Helio “the ride” with Team Penske; or, including Helio, could never have predicted that one day he would sit in a federal court along with his sister/manager facing 10 years in prison. After his grueling trial-where justice prevailed and charges were dropped-Helio learned more than ever before about his family, true friends, faith, and the real road to victory.

I don’t know where EXTRAORDINARY lives however, I know where it resides. At the intersection of Passion for YOUR dream and Being Emotionally Gracious for those that have challenged you and helped you along the journey. It resides in the gracious and emotional heart of a man that claims to “always be a student of one’s profession and ONESELF”. Amazing, how the significance of humility factors into all our lives and the perception of who we are. On this day, Helio Castroneves was the teacher, the mentor, the leader in an EXTRAORDINARY way.

How does .2011 seconds factor into your life and challenge you to making that Quantum Leap in your performance?